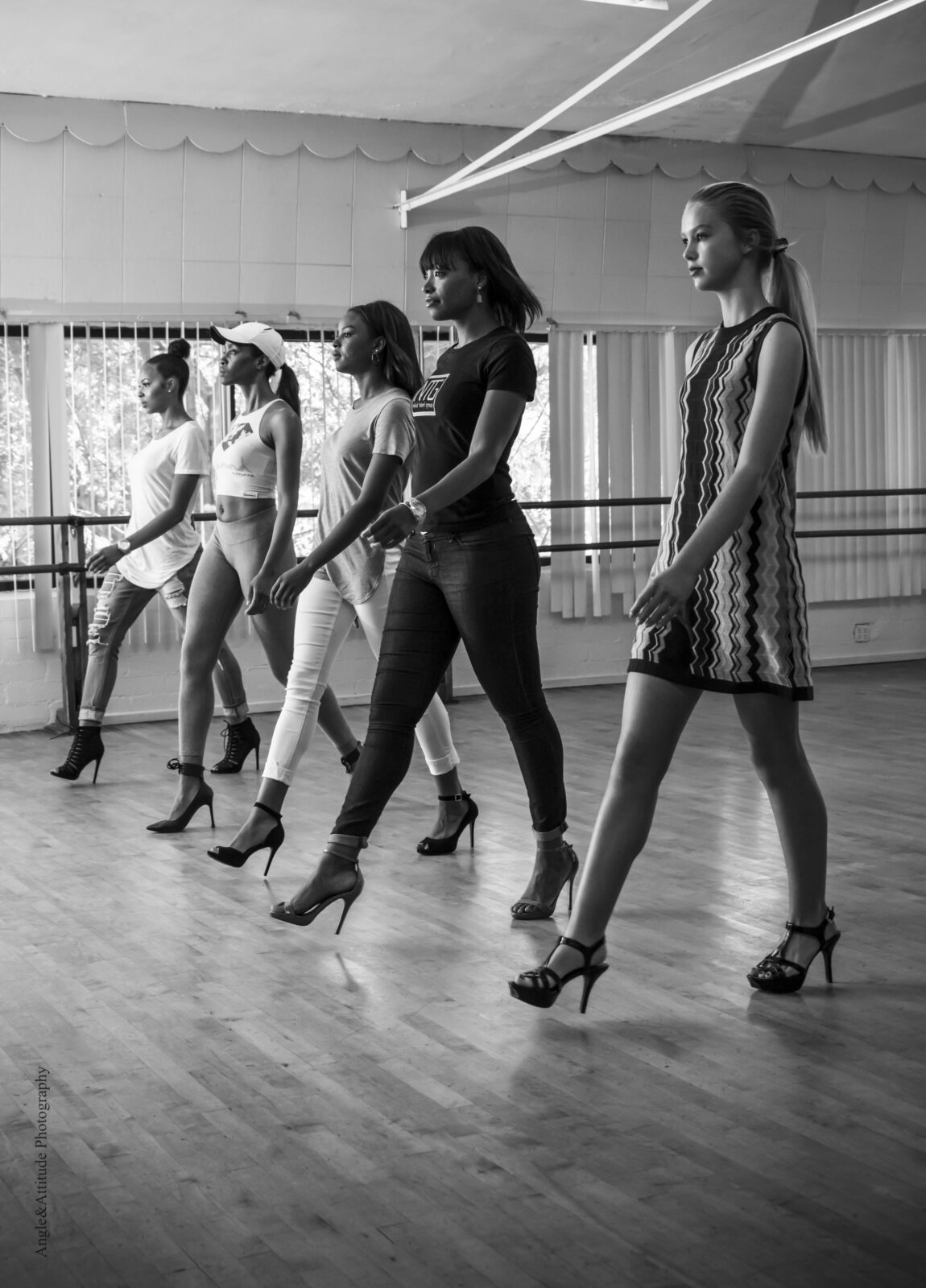 Another great two hour Beginner Runway Workshop: LA Fashion Week Edition in Hollywood on Feb 27th. We had a six-model turnout, and one even traveled all the way from New Mexico! They’re already asking about the next one. I love what I do!

Congrats to the ladies who attended!

Special thanks to NTG Photographer Nick Woods of Angle & Attitude Photography for the photos, and Brandi Allen for assisting with music, etc.

Check out pics below! 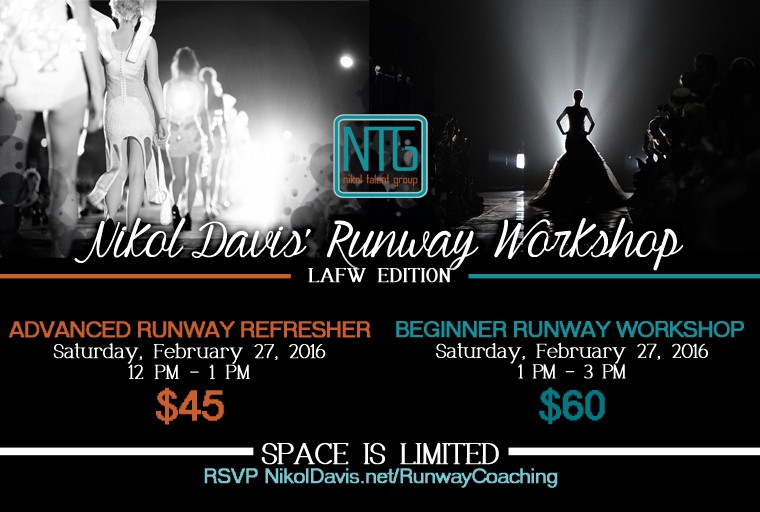 It’s that time of year again! LA Fashion Week (LAFW) is coming back in March. What better way to prepare for LAFW auditions than with one of these two workshops coming up on February 27th in Hollywood, CA:

Perfect your runway walk at this ADVANCED Runway Refresher, and return to STRUT STATUS just days before LAFW auditions begin. This fast-paced, one-hour coaching session is NOT for beginners. Refresh your audition technique, tip skills, and correct walk blunders all in the same time it will take to watch one episode of Scandal!

Sign up for the Beginner Runway Workshop with Nikol Davis, days before LA Fashion Week auditions begin! Learn how to walk with confidence, get great action photos, and have astrong runway presence through specific techniques only taught here! 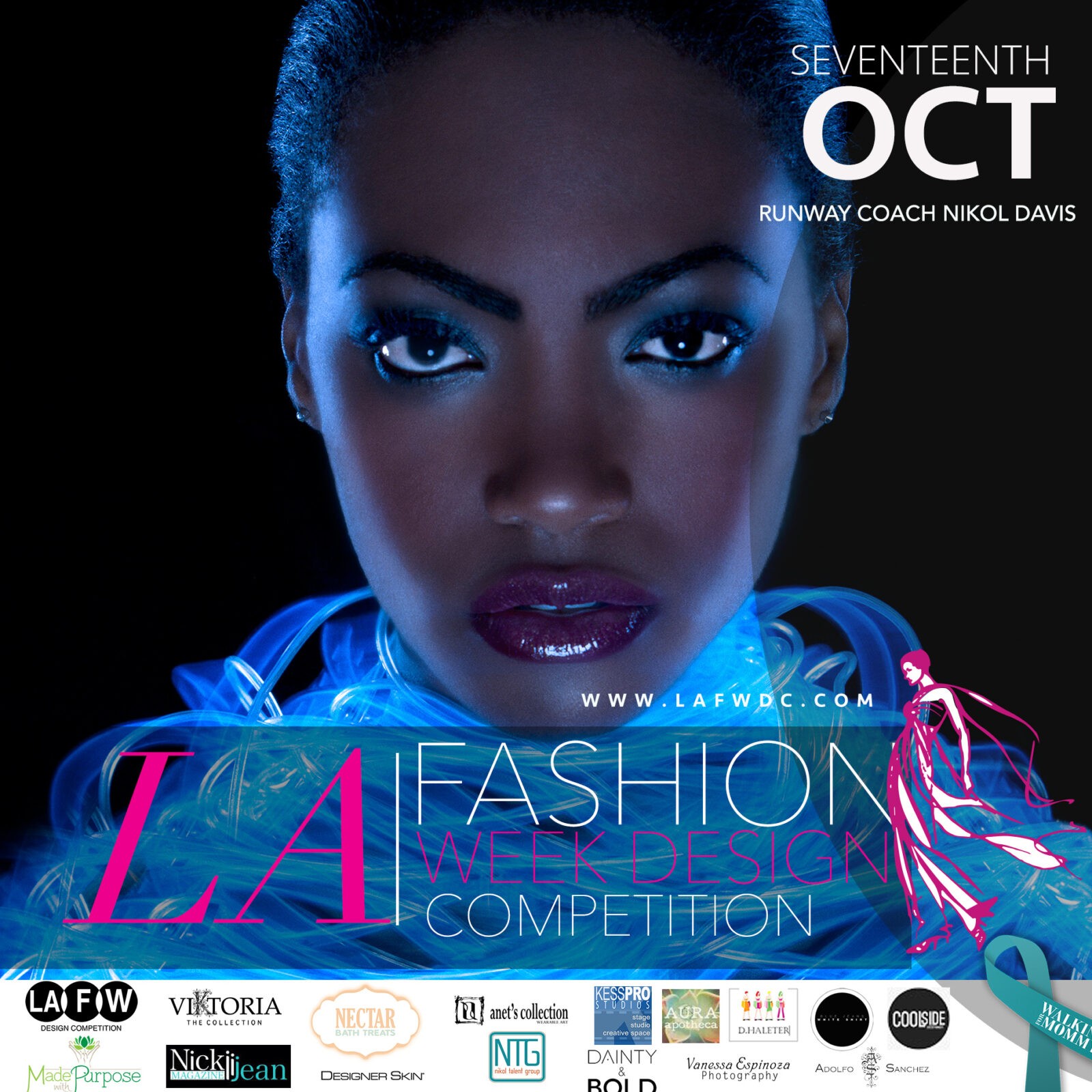 So blessed and excited to be runway coaching LA Fashion Week events again this October!

First, I’ll be working as Model Director and Runway Coach for Metropolitan Fashion Week on Saturday, October 10th at Warner Bros. Studios! It’s my first time working with MFW, and I’m super excited to be able to work with a brand new client, and meet new models! Tickets can be purchased at www.metropolitanfashionweek.net. 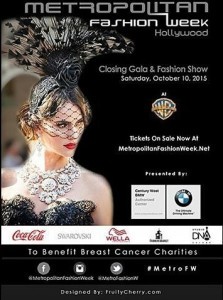 Next, I will be working at LAFW Design Competition’s Design Warz! I am proud to be returning to LAFWDC for the second year in a row as Runway Coach! This time, I’ll also be producing the event! This design competition will feature international emerging designers, and will even feature judge, Urbana Chappa, whose NYFW & LAFW shows I walked in and coached in 2013! This event is also taking place on Saturday, October 17th. Tickets can be purchased at www.lawfdc.com – seats are limited, so get your ticket today!! 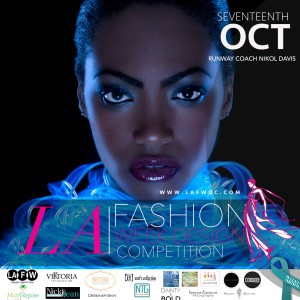 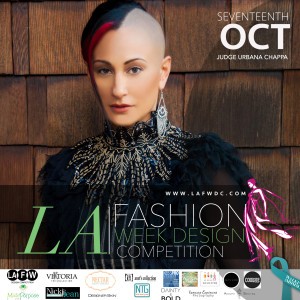 Finally, I’ll be coaching the models for the Sun & Seeds Designs runway show during Style Fashion Week LA. This show will take place on Sunday, October 18th, however the event takes place October 14th-18th. Check out www.stylefashionweek.com to view the schedule. 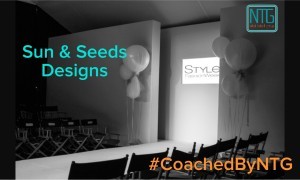 I really thank God for these opportunities to utilize the gift that He gave me, and to shine in my purpose! Hope to see you at one of these fabulous events! 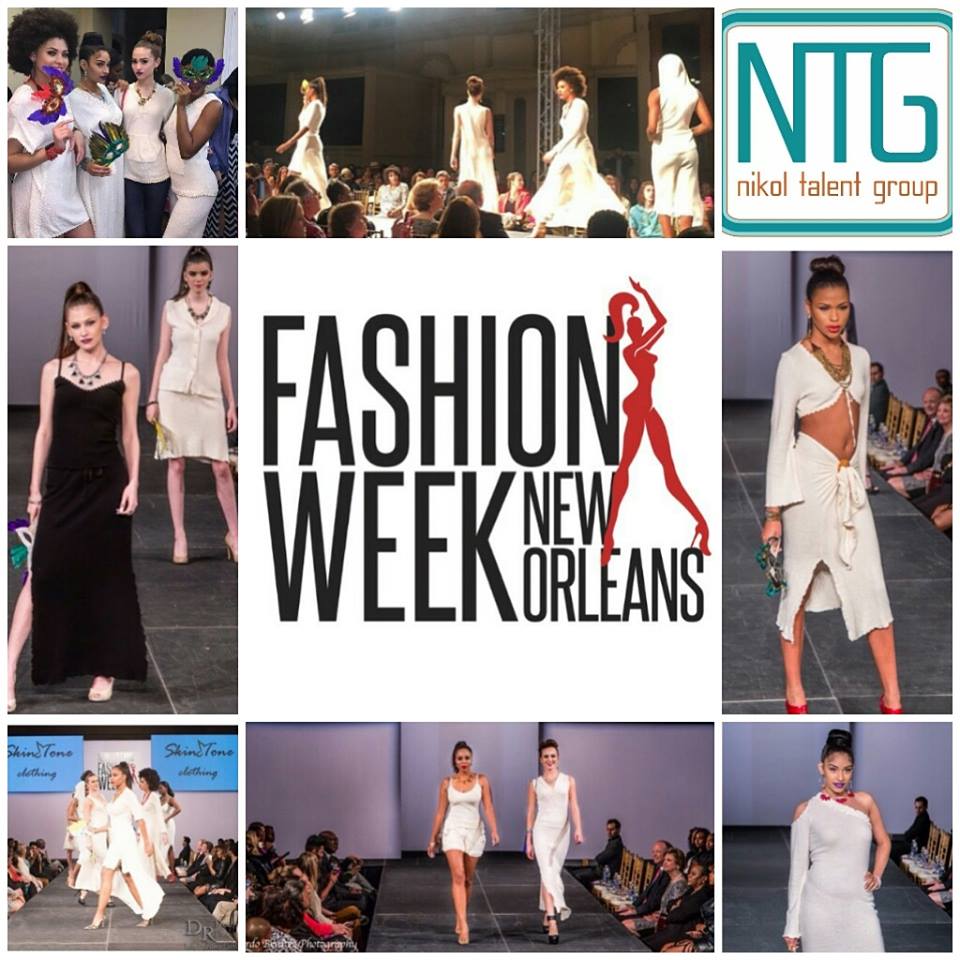 Behind the scenes, I was working hard representing NTG on the Nickii Jean Magazine event. It began with the audition I hosted, where we had over 50 models attend! Then as we got closer to show time, I ran rehearsals with the models, taught some NTG choreography for two fashion installations, and cued the models backstage during the show. Special thanks to Tina Summers and Nickii Jean for inviting me to come on in this role once again for them during LA Fashion Week. It’s always a pleasure working with them, and I’m super excited to do it again in October!! Woop!

I also had the opportunity to travel with NTG Client, SkinTone Clothing, to New Orleans, Louisiana for New Orleans Fashion Week to do runway coaching & runway choreography. Just like when I worked NYFW, it was so exciting to see a fashion event in another city, and how they run things. The New Orleans models were awesome! I only spent about an hour with them, teaching them choreography: partner walking, pattern walking, and the individual mood I wanted them to portray on the runway. They all seemed to be very excited about the choreo, and caught on quickly. Working backstage, I didn’t get to watch the scene, but the feedback from the attendees was all positive! Plus, NTG models Spencer & Ieva came out to New Orleans to walk in the show, and really added that extra flair that we needed! I was so excited that they were able to make it out! I’m so proud of them! They represented NTG so well! We brought LA (Los Angeles) to LA (Louisiana)!! Bravo to SkinTone Clothing and all of the models for an amazing show!

Now, I can officially say that NIKOL Talent Group has made its mark on LA, New York, & now New Orleans Fashion Weeks!!! …on to the next city!! Pics below… 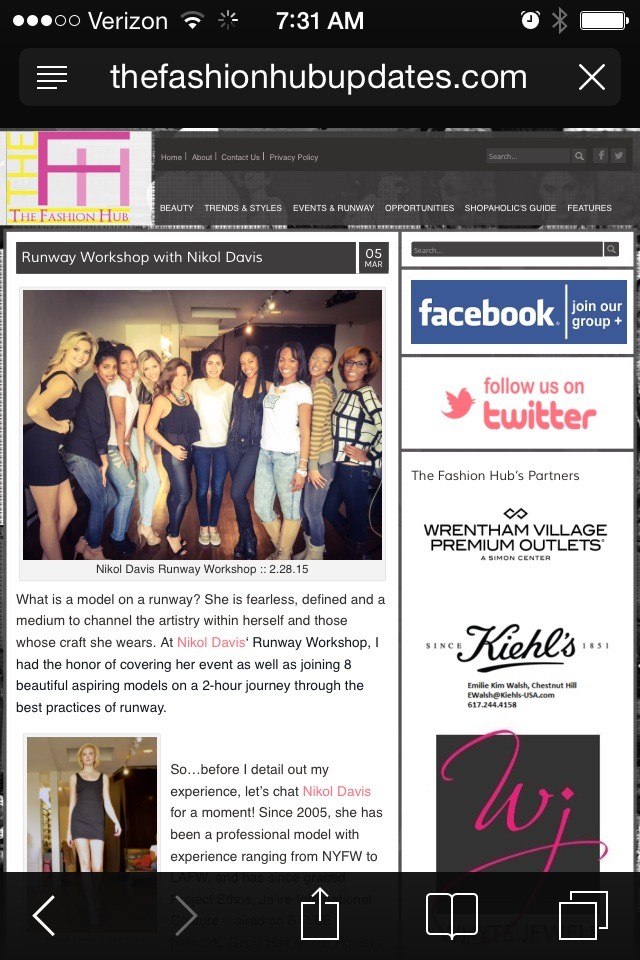 Wow! What a great write-up on The Fashion Hub by fashion blogger, Jennifer Chen about my Runway Workshop on February 28th. How exciting!! Check it out here!! 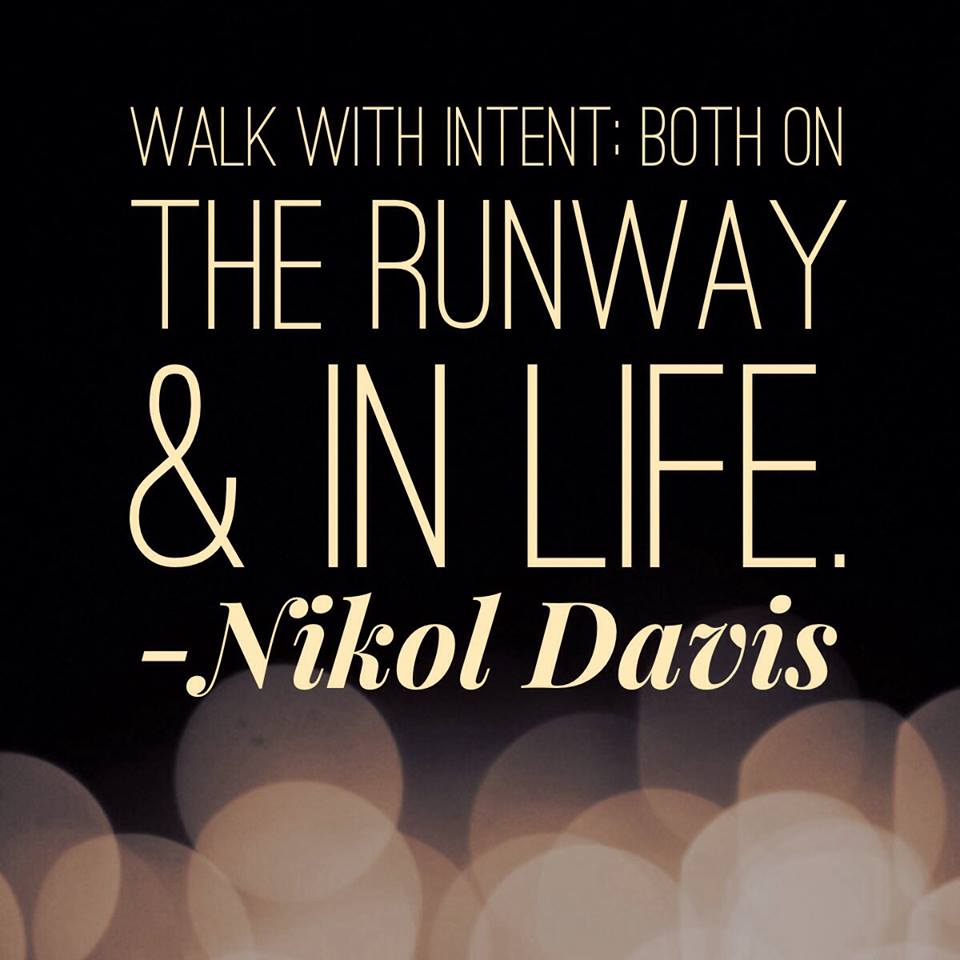 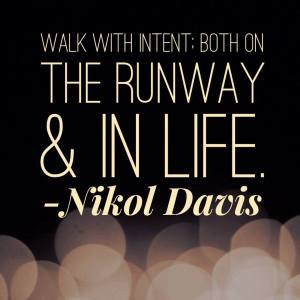 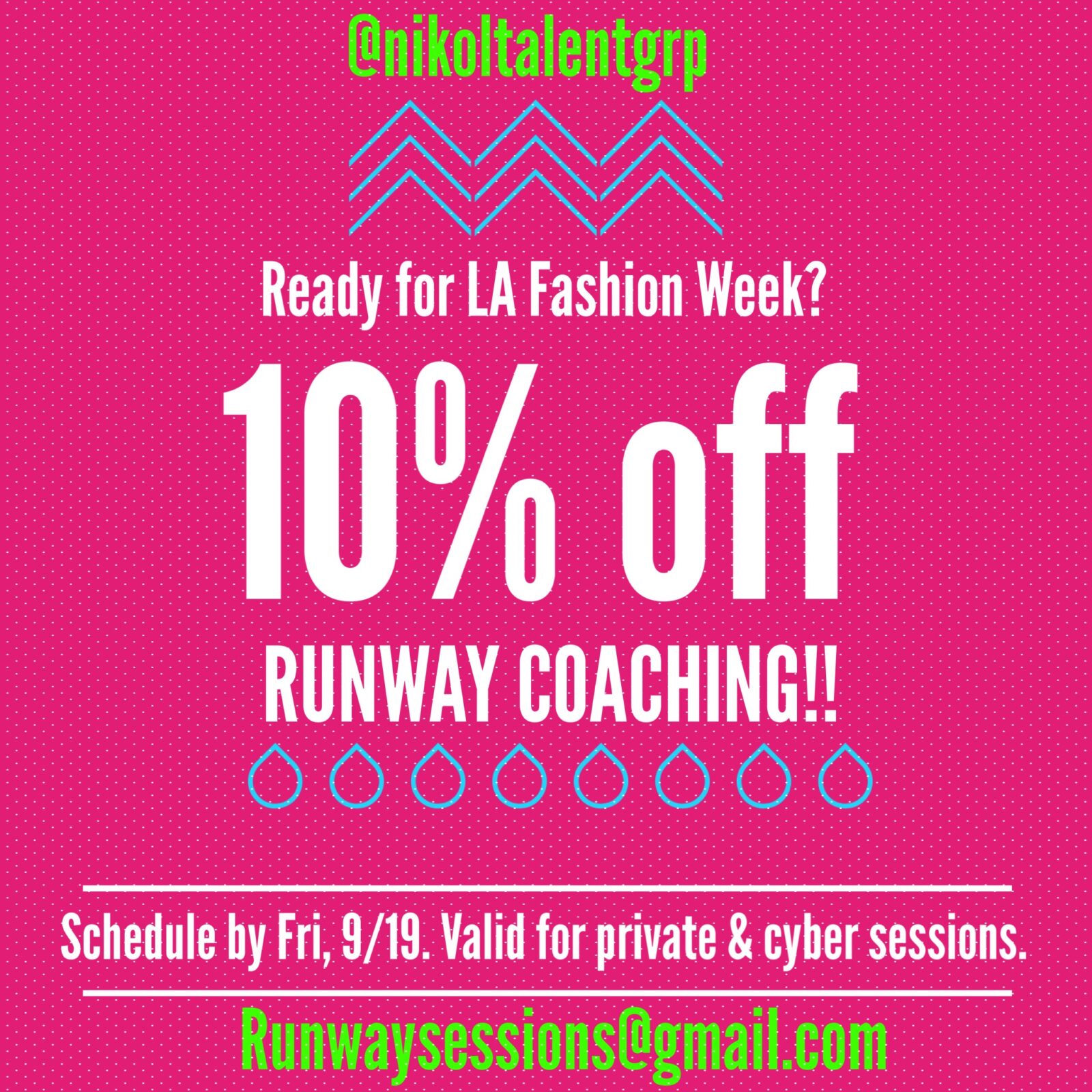 LA Fashion week is quickly approaching. Is your runway walk audition-ready? Schedule your private or cyber runway coaching session by Friday, September 19, 2014 to receive 10% off! Sessions do not have to take place before Friday, but must be scheduled and paid by Friday to receive the discount. Schedule your session today: runwaysessions@gmail.com!! 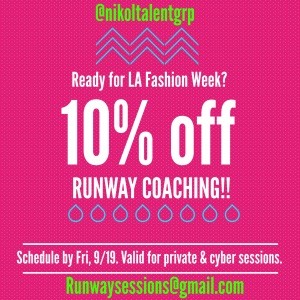 My most recent runway coaching student, is a young aspiring runway model seeking to break into the fashion industry. After attending a few auditions, and walking in a few shows, she determined that she would like to invest in her career by seeking runway training. She came to me for assistance in perfecting her runway walk. After 5 private coaching sessions, she has made much progress. Here are a few things we worked on:

Practice makes perfect! Not only was she willing and open to critique, but she practiced between sessions. The more she practices what was taught, and gets the muscle memory, the better walker she will become! Congrats to you, for your present improvement, and future growth!

Check out her progress below; before: center, after: sides.

There are a number of reasons given for why people are unable to attend my runway coaching workshops, or schedule private coaching sessions. Sometimes it’s a financial issue, other times it’s a geographic location issue, or it often times is a scheduling issue.

Problem Solved!! I am now offering Runway Coaching Cyber Sessions! Everything is done online, so geographic location is no longer an issue. It can be done at any time of the day, which resolves the scheduling problem. And finally, the low price of $25 is less expensive than attending a private session or runway coaching workshop, so the financial issue has been addressed.

Here’s how it works…only 2 simple steps:

1. Email a video of your runway walk (no more than 2 min) to runwaysessions@gmail.com
2. Receive a video response from me within 2 business days

All payments will be made through PayPal. 🙂

NO MORE EXCUSES!!! Perfect your runway walk before your next audition, pageant, or fashion show!! 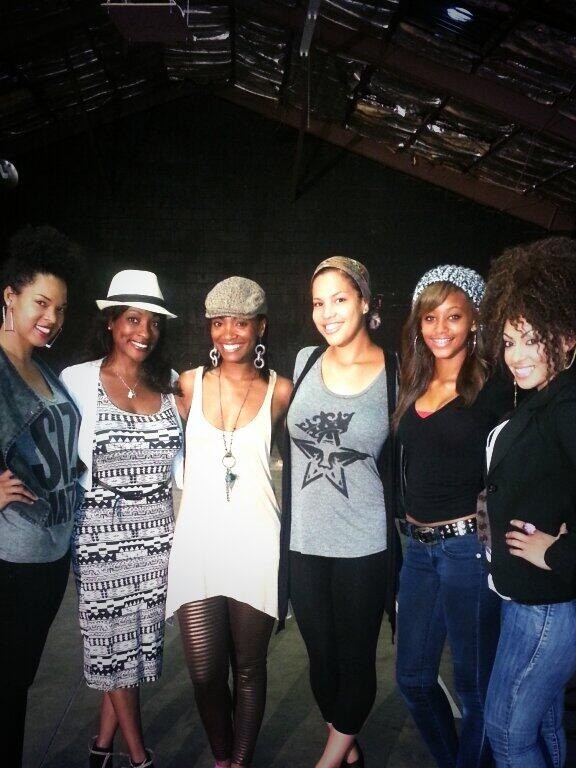 I held my very first runway walking workshop (unrelated to a scheduled runway show) on Saturday, June 8th. It was a success, and we had a blast! Thank you to all of the models to attended! Don’t miss the next workshop in August! 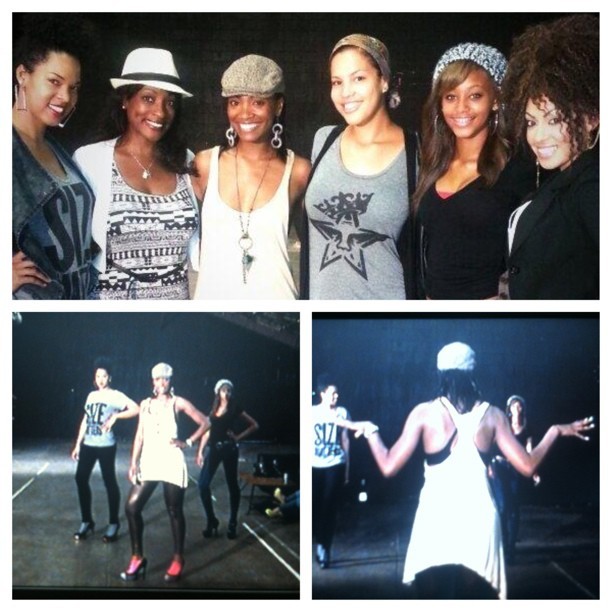